Harley and Cynthia Thornhill have truly made their apartment at the DePaul Packet Boat Landing Apartments in Lockport, New York a home. It’s filled with art they enjoy or have created, personal photos, inspirational sayings and of course their two emotional support dogs, Spud and Roxie. There they enjoy cooking a mean gumbo, the camaraderie of good neighbors, faithfully watching Jeopardy and the security and peace of mind that they have a convenient, clean, well-designed, stable home. 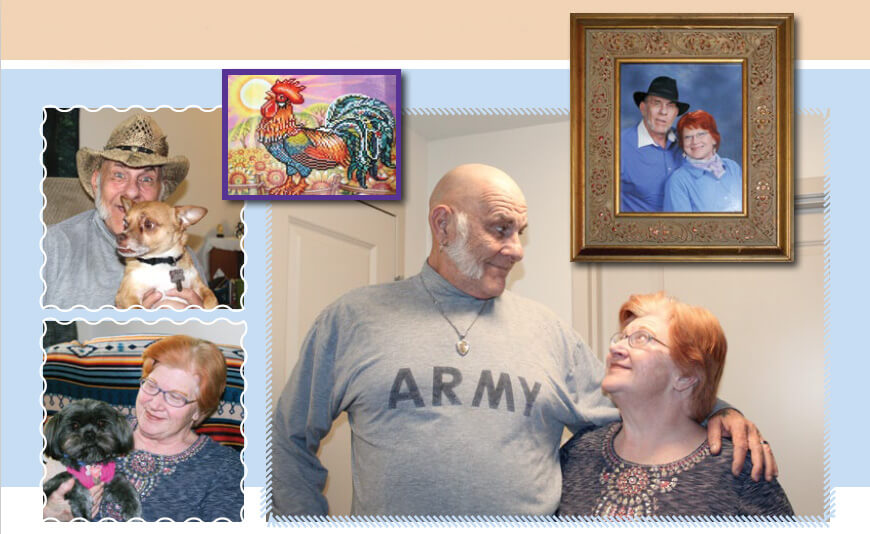 But it wasn’t always that way. Harley, 60, originally hailed from the Smoky Mountains where he grew up in poverty and entered the army at 17. The 6’7” action movie fan with piercing blue eyes once struggled with a mental health diagnosis and addiction, working sporadically at jobs ranging from a bouncer, to a golf caddy, to a carpenter, often experiencing homelessness and its devastating side effects.

Cynthia, 59, a native of New York state, began studying medieval history at the State University of New York at Geneseo. She left school, married for the first time and had her daughter, eventually returning to get her Licensed Practical Nurse degree working in several settings including Buffalo Psychiatric Center. Cynthia too faced challenges with her own mental health diagnosis and eventually was unable to work.

Both were engaged in treatment for their diagnoses when fate brought them together. Seven years ago, Harley and Cynthia met at church, and it was, as they say, electric. “I just knew I’d marry him,” she said. “I’m just blessed to be married to her,” echoed Harley.

Prior to becoming part of the Packet Boat Landing community, they had each other but their living situation was less than satisfactory. They dealt with mold, poor living conditions, an unresponsive landlord and high rent. Fast forward to the spring of 2018 when they learned about Packet Boat Landing.

“It’s just unbelievable,” said Cynthia with joy in her voice. “It’s really nice. We’ve never been in a new place before. People with lower incomes usually get older houses where the electricity isn’t…you know the best, you gotta make sure no one’s using the toaster when you plug the hair dryer in. Things like that. It’s been a blessing really. It’s perfect.”

And now, life is good if not great. A home that is beautiful and affordable with access to supports does wonders for the psyche and the soul. They are able to enjoy Cynthia’s daughter and grandchildren and they’ve made some friends. It’s truly a dream come true and it’s one they want to last.

“I’ll be here as long as they let me,” Harley exclaimed. “I have some nice friends and a safe place to lay my head and not worry about anything. People seem to have a better attitude here. I think a lot of it is because of the people who work here. They go out of their way to make us feel at home.”