Along with our colleagues in prevention, treatment, recovery and harm reduction, the National Council on Alcoholism and Drug Dependence – Rochester Area (NCADD-RA) has worked to increase awareness of the opioid epidemic and its impact on our community and families. We continue to use a variety of evidence-based prevention and environmental strategies along with educational sessions for professional and community groups.

In 2016, we invited a group of stake-holders to join our collaborative efforts for what is now the Opioid and Other Drug Task Force in Monroe County. The robust member-ship has continued to grow and broaden, meeting bimonthly to identify service delivery gaps across the continuum, share resources, network, and to combine efforts, with membership remaining strong and engaged. 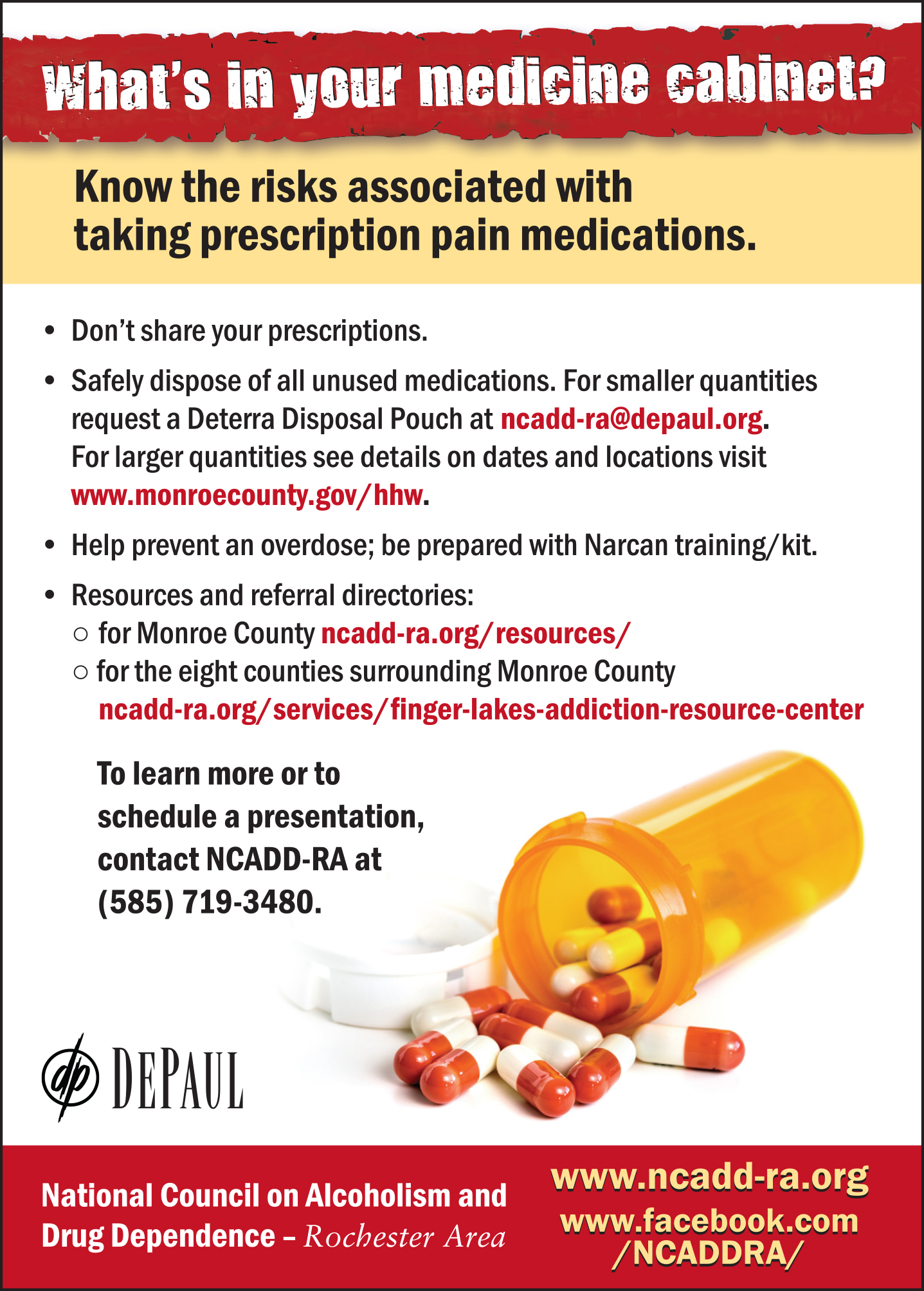 Since 2016, we’ve witnessed a shift in usage patterns that are driving ever-escalating overdose deaths. At its inception, earlier education efforts focused on raising awareness of the overprescription of opioid pain medications, which often led individuals to become addicted and then seek out heroin.

As a result of collaborative and collective efforts to reduce harm across the continuum of care:

The results have yielded a drop in opioid medication availability and over-prescribing plummeting over 50 percent. Despite efforts and advances, opioid overdose deaths have continued to rise, more than tripling between 2010 and 2020.

According to the Centers for Disease Control (CDC), 107,622 Americans died of drug overdoses in 2021, with 66 percent of those deaths related to synthetic opioids like illegal Fentanyl. The most recent Monroe County Medical Examiner reports have mirrored this, showing Fentanyl at the top of their list, identifying substances as primary cause of death. In 2020, over 98.3 percent of overdose deaths were attributable to illicit Fentanyl, compared with 10.9 percent to prescription pain medication and 8.8 percent to heroin.

Street-level drugs are almost certain to contain very high percentages of Fentanyl or may even be 100 percent Fentanyl. The synthetic opioid Fentanyl is 50 times more potent than heroin and 100 times more potent than morphine. Only two milligrams of Fentanyl, equal to 10-15 grains of table salt, is considered a lethal dose. While there is no way to know how much Fentanyl is concentrated in a pill or powder, harm reduction programs are distributing Fentanyl test strips to detect the presence of the synthetic opioid.

In August of 2022, a DEA press release warned the public of an emerging trend of colorful Fentanyl available across the United States.

“Rainbow Fentanyl—Fentanyl pills and powder that come in a variety of bright colors, shapes and sizes—is a deliberate effort by drug traffickers to drive addiction amongst kids and young adults,” said DEA Administrator Anne Milgram. “The men and women of the DEA are relentlessly working to stop the trafficking of rainbow Fentanyl and defeat the Mexican drug cartels that are responsible for the vast majority of the Fentanyl that is being trafficked in the United States.”

Illicit Fentanyl remains the deadliest drug threat facing this country. Drug overdoses or poisonings are the leading cause of death of Americans between ages 18 and 45. The DEA reports that the Fentanyl found in street drugs available in the United States is primarily supplied by two criminal drug networks, the Sinaloa Cartel and the Jalisco New Generation Cartel (JNGC).

If you encounter Fentanyl in any form, do not handle it and call 911 immediately. In Monroe County, we continue to receive reports of increasing overdoses which are due primarily to street drugs laced with illicit Fentanyl. The prevalence of Fentanyl in a range of street drugs that includes pills which may be of various colors, as well as the incidence of look-alike fake pills, remains high.

In NCADD-RA’s Spring 2022 Newsletter, our cover story referenced the DEA’s One Pill Can Kill Public Awareness Campaign (www.dea.gov/onepill) to increase awareness of the dangers around fake pills. Resources for parents and the community can also be found on the DEA’s Fentanyl Awareness page (www.dea.gov/Fentanylawareness). Additional resources for parents and community members that include community referral directories, community awareness campaign materials and much more may be found on the NCADD-RA’s website at www.ncadd-ra.org.