Living life on life’s terms. It’s a mantra Greg Williams, a client of DePaul WorkGuide, has applied to both himself and those he has helped along the way. 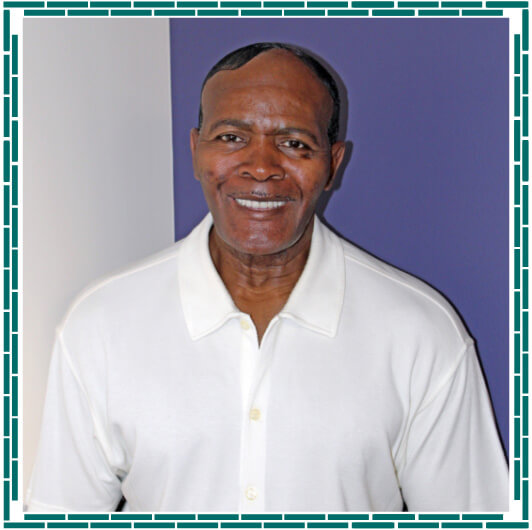 Greg, 62, was born and raised by his parents in a close-knit family in Rochester, New York, with five brothers and one sister. He graduated from John Marshall High School where he excelled at sports, especially enjoying football and basketball.

At the time, mental health was not a widely-discussed topic and it took Greg many years to be diagnosed with depression and a systemic chemical imbalance. Prior to his diagnosis, life took an unfortunate turn when Greg began experimenting with substances, a form of self-medication, which led to incarceration. At that point, he made up his mind to make changes in his life, leading to treatment, continuing his education to become a paralegal, and helping others as a peer mentor. It was life-changing. After 20 years, Greg returned to Rochester where he worked as a paralegal and reconnected with life as he once knew it.

An avid body builder, Greg eventually damaged his back, had surgery, became addicted to painkillers, and fell into a deep depression. “It really took me under,” he said. “I couldn’t walk and could barely function.”

He was unable to work and struggled to find a solution when he happened upon a yoga specialist who provided a strength and stretching regime that gave Greg both relief and hope to push forward. After three years, Greg discontinued all use of painkillers and through “hope and the grace of God” he was walking again, no longer depressed and ready to re-enter the workforce.

This father of a 21-year-old son decided to explore his options through the DePaul WorkGuide Program. His vocational counselor provided a comprehensive assessment – which pointed toward a career in human services – resume preparation, interviewing skills, and job development and placement. Greg is now helping individuals, first as a residential associate, and now as a peer recovery coach at the Catholic Family Center where he guides people to “structure, refocus, enable and equip.” In his words, he is “100 percent dedicated and overjoyed to help people who are suffering from what I had.” He is employed full-time and is fully independent.

Through it all, Greg’s spiritual connection to God kept him grounded. Active in his faith community, Greg is a pillar of his church. “Nothing happens without God,” he reflected with sincerity. That and his wife, Jackie, who has been his self-described rock.

For Greg, DePaul WorkGuide was pivotal in his journey toward finding employment, retaining a career ladder job and renewed independence. “DePaul really cares about helping you,” he said. “They helped me get to a point of self-satisfaction, learning and living life on life’s terms. They were and continue to be there for me. I love that I have a job where you can really show you love mankind. I do – and you can’t fake that.”